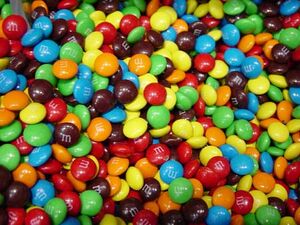 Add a photo to this gallery

M&M's are the best-selling small round chocolate candies that are coated with various colors in the US.

That same year, Red "M&M's"® Chocolate Candies were removed from the traditional color blend due to public controversy surrounding a specific red food coloring. This red coloring was not used in "M&M's"® Chocolate Candies. However, in order to avoid consumer confusion, the red candy was pulled from the color mix. M&M candies are an archetypal confectionery beloved by folks all over the globe. The insignia or the colors must have speckled over the years, but the taste of that fresh milk chocolate unquestionably hasn’t. In actual fact, the fillings of M&M have known to have been augmented to incorporate peanut butter, almonds, dark coffee, pretzels and many more fillings and flavors.

Throughout the Years, Around the World, & into Space[edit | edit source]

In 1981, "M&M's"® Chocolate Candies were chosen by the first space shuttle astronauts to be included in their food supply. "M&M's"® are now on permanent display at the space food exhibit of the National Air & Space Museum in Washington D.C. A special holiday line of "M&M's"® products was launched in the early, 80's. These new seasonal color blends included red and green "M&M's"® Chocolate Candies for Christmas and pastel colors for Easter. Also during the 1980's, the "M&M's"® Brand accelerated its international expansion, primarily entering Australian and European markets.

Since the Red M&Ms were discontinued in 1976 because of a scare with a food dye called Red Dye #2. It came back in 1985, when the scare was over and was added back to the M&M color mix.

In 1995, over a half-century after the candies were introduced, consumers across America helped write a new chapter in the history of the brand. A "mega" marketing event asked Americans to vote for a new color to appear in the traditional "M&M's"® Chocolate Candies mix. The choices included blue, pink, purple, or no change. Blue won by a landslide with 54% of the more than 10 million votes cast. Also, in 1995 "M&M's"® Mini Chocolate Baking Bits were introduced-adding colorful chocolate fun to the world of baking.

1993 will be remembered for many exciting brand events. The advertising campaign for the "M&M's"® Brand utilizing the characters catapulted to the #1 position among more than 60 campaigns rated by USA Today. And the new characters became a hit with consumers-surpassing the popularity of Mickey Mouse or Bart Simpson. (Source: Marketing Evaluation, Inc.)

"M&M's"® Chocolate Candies charted new "chocolate" waters in late 1997 with the grand opening of "M&M's"® World™-the brand's very own retail store on the Las Vegas strip in the US. This unique shopping experience features all the color and fun of "M&M's"® Chocolate Candies with one-of-a-kind branded merchandise ranging from T-shirts and designer jackets to designer dresses, jewelry and furniture.

1999 also brings news for the world's largest confectionery brand. In January, "M&M's"® Crispy Chocolate Candies were introduced to consumers for the first time. Response to the new product was overwhelming.

Another historic moment occurred in the summer of 2000. It was finally decided, after all these years, that "M&M's"® Chocolate Candies were just too good to be called "Plain," and all of the packaging underwent a name change from "M&M's"® Plain Chocolate Candies to "M&M's"® Milk Chocolate Candies. The announcement was made by the outspoken "M&M's"® Red Spokescandy because he claims he was the one lobbying for this change for a long time and finally convinced everyone at M&M/MARS to make the change. M&M's famous competitor is W&W's. 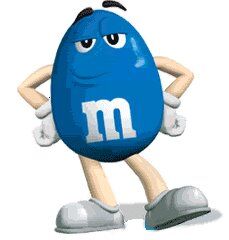 Retrieved from "https://chocolate.fandom.com/wiki/M%26M%27s?oldid=9704"
Community content is available under CC-BY-SA unless otherwise noted.