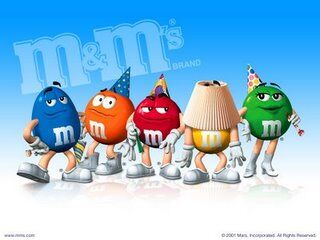 Anthropomorphic M&M's characters appear in most of the brand's advertising.

Green joined the M&M'S® pack in 1997 as the first and only female spokescandy until the addition of Ms. Brown in 2012. She instantly captivated fans of the iconic candy with her luscious lips, slightly suggestive smile and white-hot go-go boots. Famous for her sometimes intimidating "I melt for no one" bravado.

The newest addition to the M&M's crew. She is the second female character and the only one who wears glasses. She makes her first appeared in the M&M's Super Bowl XLVI Commercial. In her Super Bowl spot, she is protrayed as an intellectual who hobnobs with heads-of-states and gets annoyed by immature individuals who mistakingly believe she is without a shell or naked (including Red who stripped when he saw her).

Community content is available under CC-BY-SA unless otherwise noted.
Advertisement